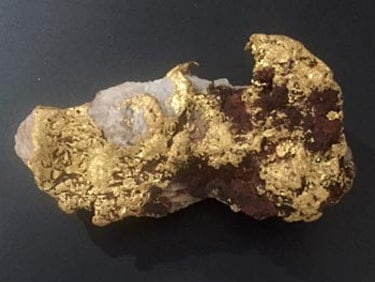 My better half (Jo) and I had many a long discussion about buying a good detector and taking it slightly more seriously than just a hobby. It is a substantial investment, but living in Darwin, it’s only an hour and a bit of travel to known goldfields, so we agreed to take the plunge.

We purchased a brand new GPX 5000 and away we went with factory coils at the ready. I have a number of good friends that assisted with advice, and we were pretty comfortable with the machine fairly quickly. I was a little unsettled that most of the people I was meeting, that were accomplished detectorists were using other coils. I looked at my options, read lots, asked people, and eventually bought a Coiltek 14" ELITE MONO. All credit to Neil who told me “it’s a game changer”.

It didn’t take long to realise that the new coil had raised the bar. I initially revisited areas I had chained and can say hand on heart were 100% covered. I found more gold.

A few weeks ago, Jo and I tried a weekend trip to a new area near Pine Creek. Saturday afternoon saw Jo working a hillside with a bit of rubbish, and plenty of scrapes and holes about, when she called me over to dig a target which turned out to be a half grammer. That was the start. We found eight pieces for the afternoon, with the plan for the morning - to work up the hill looking for bigger pieces. We are novices remember, so it was all very exciting finding a “patch”.

Sunday morning, the run continued with a couple more nuggets. Then further up the hill Jo called me to another target, a deep mellow sound, but very clear. Scrape and listen, dig and listen, dig and listen. About six inches down and the coil started to scream, another six and it was overloading. I went and got the pin pointer. A friend followed me back to watch the show, nearly knee deep and shortly thereafter it was out of the hole and I was grabbing handfuls of dirt and waving them over the coil. My mate casually reached down beside me and picked up a rock. There was a pause……….”No bloody way, really!” He dropped it into my hand with a thud. All I could say was “Holy crap”. It was a beautiful quartz specimen wrapped in gold and weighing over an ounce. Jo looked like the Cheshire Cat. All together we managed to pick up over two ounces in two days.

I went back again for a day trip last week, and clearly word had gotten around. There were new holes everywhere. I started to poke around the new diggings and couldn’t believe it when I got a clear signal from a new hole. It was a chipped off piece of nugget that had been left behind. Another new hole and a clear signal from the dirt pile that was a clean 0.22 grammer. Then in between holes that were only three metres apart I picked up a soft but clear signal. Funny as, a foot down and the GPX was overloading but the pin pointer couldn’t find it, yet. Solution - throw Sadie down the hole. 45cm deep and out comes an 18.5g nugget. What a day!

Awesome coil, but there is always a negative. I reckon Coiltek owe me $25 bucks.

You see, I have had to have the Minelab carry bag enlarged at one end by an upholsterer, to fit a 14’ coil. The mono-elite does not come off the machine.