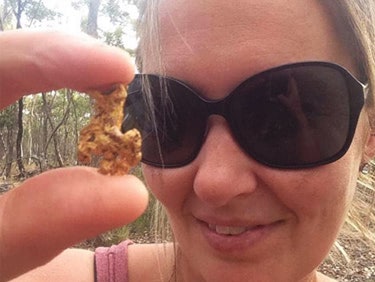 Deciding to take an extra-long weekend this Labour day, we headed off on Friday to one of our favourite spots within the Golden Triangle in Victoria. Giving the kids and extra day off school and kinder we left home at 5am to get a head start. Arriving at our destination and after setting up camp thick in the beautiful Vic bush, my partner was keen to go out and have a swing around the area. It was heating up, at this stage around 11 it was about 32 degrees and muggy.

A couple of hours went by and so did a couple of targets – but none of the good stuff was found. Coming back to camp he decided he felt like he wanted a midday sleep so went and had a lay down as he was tired.

Chatting with our 2 boys (6 and 4) I said “Come on, let have a look around camp and see what we can find”. I strapped the GPX4500 with the Coiltek 14inch Elite on, and with thongs on my feet, the kids and our 6mth old Great Dane Puppy set off. Our first target was only about 5 min in, which turned out to be ground noise, that’s ok. Second target 10m away was a small piece of lead. Kids are happy – at least we found something! Another 5-10 min later between two trees we came across a sweet sound roughly 20-25m from camp. I have only ever found a few small pieces before (0.1-0.2) and only after my partner had found a little patch and would put me on it. This noise was clear and clean and it was still there after scratching leaf matter away. It got louder and louder the deeper I dug. I was so hot! I dug for maybe 15 min and nearly gave in and went to wake my partner up to get him to finish it, but I thought ‘No – I will do this’. My eldest saw how much hard effort it was taking and went to go and get me a bottle of water from camp, but as the target was screaming at this point I didn’t want him to miss the end result. ‘Just one more dig’.

My puppy was loving the hole I was digging and was so impressed, she must have thought I was digging a hole for her and she kept getting in it and attempting to lay down, it must have been nice and cool! Kids are standing by armed with their Go Find 20 and their Go Find 40 and were kindly offering to dig it for me, so gorgeous.

Using the last of my energy, really levering the pick in and giving it a really good dig, I wave the detector over the hole. BAM it was out!

Feeling excited now, I located the target in the pile and the kids and I each took in turns of getting a handful and waving it over the detector. I picked up a large chunk and the detector went crazy! I paused for a moment knowing I was about to uncover something and I hoped for my life it was gold. It had to be I thought, the sound was so perfect and the way the target just increased in volume surely was a dead giveaway.

I broke the piece apart so carefully bit by bit. The target was in half of the chunk and the detector was screaming, slowly breaking in half again I could see an interesting shape embedded within the dirt. The kids were so excited the started calling out to dad to wake up him, but clearly with the music on at the van he couldn’t hear us, he was sound asleep. Breaking away the clump unearthed a beautiful piece of GOLD! 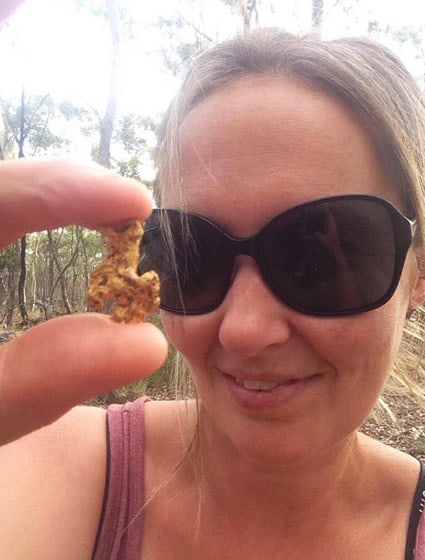 Kids were yelling for dad but he was not waking. I said “Let’s be quiet, wake him up and surprise him – he is not going to believe this!”

As we entered the camper the kids said “Dad wake up we have found something heavy that you will like” He looked startled when he woke up, looking at me, my eldest excitedly yelling “Dad we found a heavy piece of gold!” I had a huge smile on my face and said “We are not kidding you, we found gold – a good bit. Hold out your hand”. Resting this piece in his hand he said “What, Where did you get this? Did you find this – are you serious?”

Knowing he was half asleep still I knew this would be an awesome wake up call for him! “You’re kidding me – well done!” he says as he realises he isn’t in a dream and is in reality, he jumps out of bed pretty quick to get the scales. High fiving us.

The kids, the dog and I found a beautiful piece weighing 6.07g. – Not bad for Novices!   The next day I went onto finding another piece 15m from camp weighing 0.85g. My time must have been up. The gold gods must have said I’ve found enough trash!

The total for our weekend away was 12.09g across 8 pieces, with my bits contributing to more than half!

I convinced my partner to take the Friday off as an extra day off work. So glad I did.