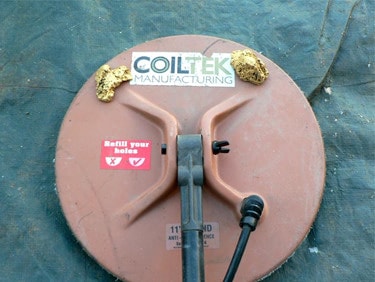 The day had finally arrived, the bags and supplies were packed, the wheels were spinning and we were on our way to enjoy our yearly adventure in the wilderness, detecting the WA goldfields, meeting up with friends and having a jolly good time.

On arrival, we picked an area where we had located gold in the past. My hubby and Dave were using Minelab 4500 detectors, experimenting with round and elliptical coiltek coils. The elliptical coil was snagging nuggets of .2grams to 3 grams in size and the 6 inch coil was keeping pace with it.

Sitting around the campfire, enjoying a few drinks, Dave commented, “Put your hand up, if you found gold today”. After a few days of not finding gold, I was beginning to question my detectors performance and settings. I have a Minelab 4000 and was using a Coiltek DD 11” Anti-Interference Coil. The boys were trying to talk me into using a Mono Coil but my anti interference has found lots of gold and I preferred it for general detecting. It is nice and quiet on mineralised ground and doesn’t warble when I’m near other detectors and best of all, I can discriminate some of the steel. Depending on the day and my mood, I usually dig every target, just in case. Although I wasn’t finding gold, I was finding plenty of bullets, so kept plugging along. Everyone has a dream, and mine is to find a one ounce slug.

I had my eye focussed on an area dense with foliage that I yearned to detect, but I was frightened of getting lost (as I had done on numerous occasions). After putting on a fluro vest, hubby and I wandered over to the area after lunch. It wasn’t long and I was digging a well-defined metal signal and even though it discriminated, I dug it anyway. A Horseshoe! My instant thoughts were, horseshoe - good luck - turn it up the right way to keep the good luck in. I stuffed it in the front of my pants and continued on.

Working on rocky ground, kicking away rocks, moving branches, I got a broad signal. Dig, dig, dig, the gravelly hole which was getting deeper. At 12” down, the target was out. Feeling a clump of dirt fall into my hand and looking closely, my heart skipped a beat, I couldn’t believe what I was seeing. Rubbing it on my jeans, I called out to hubby, who looked across, wondering what was wrong, as I was hunched over, crying. He rushed over. I grabbed his hand, and dropped the 2.5 oz nugget into his hand. His first few words I can’t put in here but then, “well done”, with a huge hug. With renewed hope and enthusiasm, the three of us searched the area until dusk but it appeared to be a loner nugget. Back at camp, a scrub with the toothbrush, revealed all its glory. It was beautiful and I gloated over it around the campfire. Hubby said, “ I noticed you didn’t put that piece in your mouth to clean it.” This was normally what I did when I found gold. I laughed.

Next morning, hubby had a notion that there must be nuggets deeper in the area, so he placed his Coiltek Goldstalker 18”x 12” Elliptical Coil on. His intensive efforts for large nuggets were unsuccessful, but he continued finding gram size gold at good depths. We detected that area all day, and I was about to throw in the towel, when I received a mellow sound through the headphones. I started digging to retrieve the target. I stared at this nice clean target I held in my hand, the heaviness of it I still could not believe. I thought it looked like a bowler hat. I called to hubby, “I’ve found one”, and quickly shoved it in my mouth, cheeks bulging. On walking towards me, he was saying “Clearly it isn’t the size of your last find”, laughing. I held out his hand, dropped the nugget into his hand. His eyes glued to this 5oz nugget he was bouncing in his hand, stating more words I can’t describe.

This was a once in a life time experience for me, unearthing these nuggets. I believe what they say,”If it has your name on it, you will find it”. You just have to walk over it. Both of these nuggets were found about a foot deep, with a Coiltek DD Anti-Interference coil on a Minelab 4000 machine.

Thank you Coiltek for helping me realize my dream.