Hard Won Golden Tips that I Wish I Knew Sooner

The steady hum of the SDC reminded me of the buzz of a mosquito, yet it was somehow quite soothing. I was full of anticipation as I carefully moved down the creek, but also not particularly confident. I really thought that I had found all the nuggets from this patch.

The slight bump in the threshold pulled me back to the task at hand, and moving the coil back over the spot, there it was again. Back and forth again, hmmm, hmmm, great, it’s repeatable.

To say I was surprised was an understatement. I have had over 400 nuggets from this stretch of creek over the last 6 years. One afternoon I went with a mate and returned with 81 bits, pulled from small gutters in the bedrock. The biggest from here was a nice 10 gramer, but the average had been 0.2 of a gram. The patch had seen all machines, from the GP 3500 to the GPX 5000, the Zed and the SDC. I would have called the place “thrashed”. I’d had a brief resurgence when the Coiltek Elite 14" came out and added about 50 more pieces to the tally. Surely that must have been the end of it. Then came the Coiltek Gold Extreme range for the SDC2300. When I received the first coil, a nice little 10" x 5", with the adapter kit to fit it to the SDC, my first thoughts returned to “The Corner”, simply because of the sheer number of small nuggets that had been found there. Following the instructions, the fitting of the adapter and coil was a breeze. Immediately, a couple of things became apparent. Balance felt much better, and with the mounting of the coil in the centre, it was easy to use your foot to manipulate it to push into the many crevices that were always being negotiated in the areas that I detect. This also meant that when pushed flat, the machine would stand up on its own, instead of always falling over. Another benefit of the adapter is the additional length it gives the detector, a benefit to taller people, but being vertically challenged, unfortunately not something that I was desperate for. 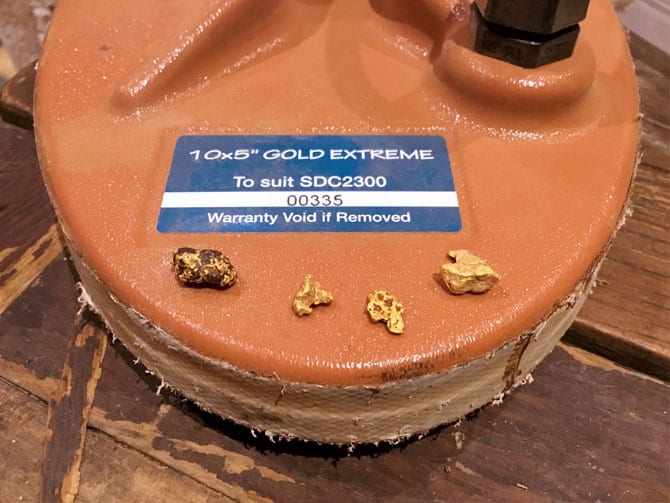 So, after scraping the loose dirt with my foot from where the target was, I ran the coil back over again and sure enough, that sweet sound. Yep, another one. I pulled the pick from my belt and gave the spot a bit of a scratch and it was out. Pinpointing in the small pile was incredibly easy using the tip of the elliptical coil, a benefit I had always appreciated. In the scoop it didn’t take long to reveal a nice little nugget of about 0.1 of a gram. That was the beginning of another good day. There were 16 more bits from this patch on just the first day of using the Gold Extreme coil, well on the way to paying for it. On returning home from the weekend away, I put in a request for the 2 other sizes in the range, the 11" round and the 14" x 9" elliptical.