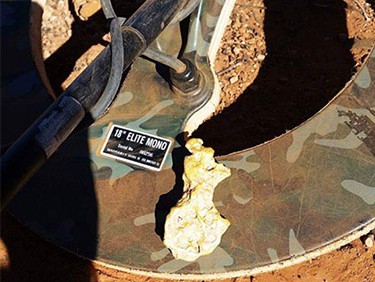 So all up in the previous 6 odd months I'd found about 10g of the good stuff with all of it in the last month. Now that may sound ok, but when you live in the Goldfields and generally spend a couple of days a week in the bush, the 5 barren months were enough to start some serious conversations with myself! I had just invested in the 18" mono to compliment the 14" Elite and was pretty happy with it since it had uncovered a 7g and 1.5g for me. Now I'll just say perseverance is the key. In the 5 years I have been detecting I had never got close to the 1 ounce club but could feel in my bones that something good was on the way. Didn't know when.... and there we were 5 minutes into it and 20m from the wagon when I poked the coil under a salt bush and got a pretty strong signal straight up. I hadn't done a scrape or checked for surface junk and called out to old mate Pete to stop looking the big ones over here, fully expecting more detritus from the battlefields of the Goldfields. I started the process of elimination and the signal was fully toning out after a couple of scrapes. I called old mate over as he was running a 7000 and I was keen to get a comparison to my 5000. Didn't make a bit of difference as his started to tone out as well. Now I've been let down more than once when having a dig so I don't get excited until I see the glim, but at about the 300mm mark I admit I was thinking maybe..... Another scrape and a wave of the wishing stick said yep still in the hole when something caught my eye. I pounced like a tip rat on a meat pie and when I looked at what was in hand launched straight into the happy dance! 272g of goodness, or about 8.8 ounces. Take that 1 ounce club!