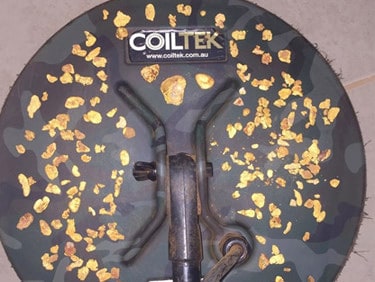 Due to the weather heating up in the Pilbara my friend and I decided to head out for a night detect on the last full moon. It was forecasted to be overcast (only 34 degree) the next day so we stocked up on extra food and water just in case.

100km out of town we turned off onto a goat track for a 45 min bumpy ride to an old know gold area. We arrived out there around 4.30pm and spied a couple spinifex covered hills out in the distance so we made the decision to head over and check them out. We parked on the saddle between the hills. The ground didn’t look promising but we decided to give it a crack anyway.

I set my GPX5000 up with the 14" Elite and not 5 paces from the car i got a nice signal. Moving the detector to the side to dig the target there was another signal. I thought great we have landed on old junk heap. So i dug the first target and found a nice flat piece of gold just under a gram. My heart started to race thinking we are onto something here.  I marked the other target and did a quick walk down the side of the hill. I could not contain myself as the 14" was detecting target after target after target.

Because of the spinifex being everywhere I went back to the car and changed to the 11" Elite and set to work. Everywhere I waved the coil was a target. My detecting mate found the other side of the hill was the same. The gold had shed both sides.

We decided to do a side each. Me with the 5000 and 11" elite and he had his GPZ7000. Needless to say it was nonstop digging for the next few hours. Luckily most nuggets were shallow and easy to get out.

Around 10pm i was in need of some food to keep me going. I decided to detect a straight line back to the car about 50m away. An hour later and at least a dozen more nuggets in the container and still 20m from the car i just turned the detector off walked back. Sitting down having a feed we were awe struck in how lucky we were to have parked onto of a virgin patch. We celebrated with a couple beers before resuming. It was the same for the next few hours, multiple targets in same holes, the gold was everywhere but confined to about a quarter size of a tennis court both sides of the hill. The 11" Elite was getting a work out. Most of the gold was very flat and between .5 to 2 grams. I did manage to get a nice 17grammer and two 4 grams. We stopped around 1am to try and get some sleep as we decided to detect into the day as well. Well 4am and we were both at it again, too much excitement to sleep.

We continued onto lunch time with a couple breaks in between before we had to pack up as we had work the next day. We were both totally exhausted after digging up over 300 pieces of gold. I totalled 126 grams withe the 11" Elite while my mate with the 7000 picked up 156 grams.

It was an unbelievable experience and cannot wait to get back there.