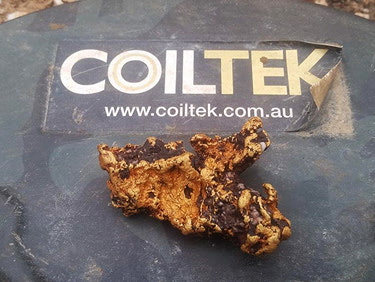 I recently found an undetected patch of good gold nuggets in the Victorian Golden Triangle. Right by a track that people have driven over for years. Yes there is a fair amount of trash around, but it just looked too good. A few junk pieces and my first piece was over one gram and not too deep. I have been back twice and am over the ounce mark with the biggest up until last week being 8.6 grams. When my brother who has never detected for gold before saw this he needed to book a flight from NZ and come out and join our Dad and detect the patch. We borrowed a Minelab GPX5000 with the Coiltek 14” Elite Mono attached from a friend who said it was a "damn good coil.” Not running the coil on my GPX I still managed to find a few deeper bits, but my brother was determined to go over and over the ground again. I tell you what, between the coil, settings and his damn good persistence and the lesson to go slow and low he found 2 more bits where I had been over. Then I took off to leave him with it whilst I went wandering to see if the patch would continue further down the slope. When I came back I said “How'd you go brother?” He rattled the jar and popped out a solid 1.7 grammar. “Good on you mate” I said excited for him, then he had this grin and said I also got this one! And pulled out of his pocket (obviously I gave him a jar too small) what I thought was going to be a quartz specimen, but when he dropped it into my waiting hand I could immediately feel the weight. NO way, No way, No WAY man. Yes way! and right by the track under a tree covered by a couple of old limbs. I went pale and he and Dad went into cheers. His forth gold nugget EVER and it is a 141 grammar or just shy of 5 ounces. Beginners luck? And the right equipment. He had to leave in another day but gold fever had set in and he was on fire. Even widening the patch with 2 quite deep targets he said were faint signals. It’s a shame I did not see it happen, or video it on my phone to add to the YouTube I have of this patch.