Prev
Next
Show all

From grams per week to ounces!

I’d like to think we’ve all been there…Those days on end when we’re out detecting and all that comes to light are bullets, shoe nails and rusty non-descript trash.

After weeks of scouring the ground for nuggets, I had acquired an exceptional number of tiny specs, but nothing over a couple of grams. 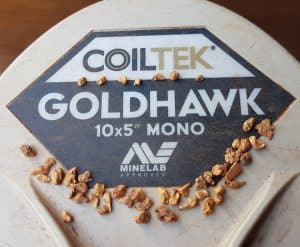 I was fortunate enough to have been field-testing Coiltek’s new Goldhawk range of coils for the GPX6000 which have proven themselves to be dynamite in locating those tiny flecks of gold that have been missed over the years with earlier model detectors and less sensitive coils. Now, don’t get me wrong, I love the fact that I am frequently finding small gold with these coils, but a couple of grams a week isn’t going to cover my costs in Western Australia and is not much of a salve for being so far from home!

It had been another long day going over the ground without a single spec and by 4 pm I’d had enough. I’d been following a line of tiny nuggets leading me to an area where the geology was starting to change from rocky to soft, deep-looking soil. A couple more minutes and I was set to pack it in for the day.

I was using the new Goldhawk 14 x 9” mono coil as this was best suited for the terrain I was covering when an almighty scream blasted through the headphones. It was probably an old bullet, a shell casing, or perhaps a tobacco plug….. who knows. Too tired to care, I half-heartedly hammered into the ground with my pick expecting a rusty bully beef tin to reveal itself. But nothing popped out.

After digging down around 10cm with nothing obvious coming out from the dirt, I ran the coil over the hole once again. The target was still in the ground. My heart started beating that bit faster and I was now paying close attention, thinking that this could be something nice.

The machine was blanking out and the target was still in the hole at 40cm!

With mounting enthusiasm, I grabbed my pick and got stuck into bringing whatever it was out of its depths. Swinging the coil over the hole one last time, it was evident that the target was out. In my first grab of the soil, I immediately felt the weight of the nugget. 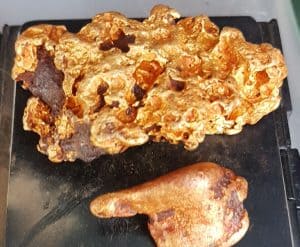 The small stuff all adds up, but this kind of once-a-season find is the ultimate payoff.

So the big stuff, it’s still out there. With persistence and the best equipment, it then just becomes a matter of time and effort.